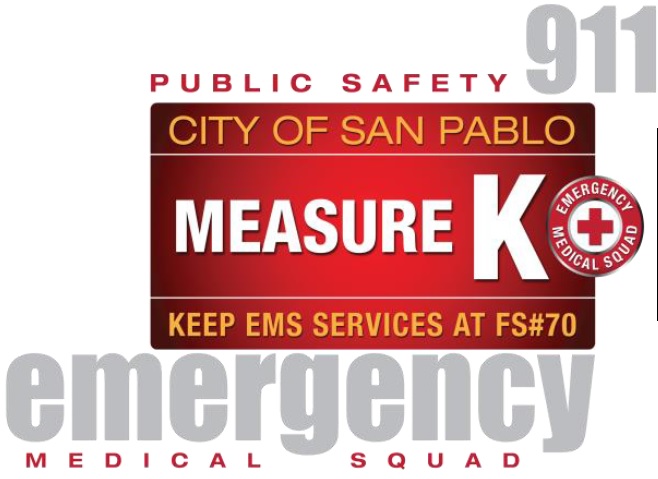 What is Measure K?
"To ensure continued and adequate Emergency Medical Services for San Pablo residents, given the recent threat that County Fire Station #70, which is located in San Pablo, may be downsized or closed and given that Station 70 presently provides 100% of the EMS services for all San Pablo residents, shall San Pablo increase its sales tax by one-quarter percent to fund the creation of an Emergency Medical Services Squad, with mandatory audits, community oversight, and annual reporting.”
2) If Measure K passes, it will authorize a quarter-cent increase in the City’s sales tax; from 9% to 9.25%. Thus, the cost of a purchase of $100, where sales tax applies, will increase from $109 to $109.25.

3) The tax will NOT be charged on food nor medicine.

4) Passage of Measure K will NOT increase local property taxes.

5) There is no “sunset”; 100% of the funds generated through the approval of Measure K will be dedicated to providing EMS services for San Pablo residents, into perpetuity.

6) Before deciding to place Measure K on the local ballot, the City conducted a scientific survey of San Pablo voters; over three quarters (77%) of the respondents said they would either definitely or probably vote YES on such a funding Measure; City officials also met with community leaders, twice (members of the Citizens’ Advisory Committee are listed at left), to discuss community priorities and options for addressing this pending crisis.

7) Check the IMPARTIAL ANALYSIS of the need for Measure K and of the Resolution.

How will the $ be Spent?

8) If passed, the money generated through Measure K will be used to create an EMS Squad that will operate out of ConFire Station 70; it will operate 24/7; and, it will enhance Emergency Medical Services for San Pablo residents, while simultaneously reducing the cost of operating the fire station, thus minimizing the likelihood that County officials will be forced to cut EMS services to San Pablo residents or close Station 70, altogether.

10) It is estimated that Measure K will generate approximately $600,000 annually; the City will dedicate an additional $400,000 per year from the City’s General Fund in order to guarantee that the EMS Squad will be funded, permanently.

11) The sales tax will generate income from non-residents, as well as residents, when commuters purchase gas, frequent local restaurants, and shop in San Pablo.

12) The sales tax provides funding that CANNOT be seized (taken away) by the State; rather, these monies will remain in San Pablo to benefit local residents.
Additional Facts to Assist Voters in Making an INFORMED Decision

13) ConFire Station #70, while being located in downtown San Pablo, is NOT a City-owned and operated facility; rather, it is part of a 22 station County-wide fire protection system and governed by the Contra Costa County Board of Supervisors.

14) Fire Station #70 (San Pablo) is the second busiest County fire station in the County, with over 3,000 service calls annually and a huge majority (83%) of service calls related to Emergency Medical Services.

15) Approximately 83% of all service calls at ConFire Station 70 are for EMS.

16) Due to budget restrictions that grew out of the downturned economy, today, FS #70 only staffs three (3) fire fighter/paramedics on one (1) Engine Company.

18) Doctors Medical Center (DMC) is slated to close its doors on July 26, 2014, due to financial challenges. This reality makes the health care crisis facing San Pablo even worse; thus, increasing the need to create an EMS Squad in order to maintain adequate 24/7 Emergency Medical Services for San Pablo residents.

21) In 2012, San Pablo provides a limited share of property taxes (approximately $811,000) annually to the County for supporting fire services due to the redevelopment project area which encompasses 94% of the City.

23) Since 2008, ConFire has seen a $32 million DECLINE in property tax revenues, which (with the exception of Automatic Aid) is the single source of funding for the county fire district.

24) The Contra Costa Fire District is facing INSOLVENCY by Fiscal Year 2016-17; this is due, in large part, to a Structural Deficit of $6 million to $10 million, per year.

25) In November 2012, the County Fire Protection District (ConFire) placed a $75 per parcel tax measure (Measure Q) on the County-wide ballot which failed to reach the requisite 2/3rds vote needed to pass. This forced Contra County officials to ultimately close five (5) ConFire stations during 2013; these were located in the cities of: Clayton, Concord, Martinez, Pittsburg, and Pleasant Hill.

26) The San Pablo City Council unanimously passed a Resolution in Support of ConFire’s Measure Q a County-wide Fire Parcel Tax Measure, since public safety was then, and remains today, the City’s top priority (based upon a scientific survey of the community-at-large).
History of Fire and EMS Protection in San Pablo

27) In 1926, San Pablo County Fire Protection District was formed to provide fire services for the San Pablo community (then an unincorporated portion of the Contra Costa County).

29) In 1975, the West County Fire Protection District was formed and continued to provide fire services to San Pablo.